Constitutional Carry at the State Level

From the formation of the 13 original states, Constitutional Carry was law in all states until the 1800s. By the 20th century, all states except Vermont had enacted concealed carry bans, with an exemption in most states for those citizens with a permit.

Help NAGR fight for your rights by signing your Constitutional Carry petition, or select your specific state at the bottom of this page.

For many decades, the only state to allow “Constitutional Carry” of a handgun (i.e. without any government permit) was Vermont.

Due to its narrowly worded state Constitution, Vermont has never been able to have a restriction on the method of how one could carry a firearm, and thus, in this regard, Vermont stood entirely separate from the rest of the United States for quite some time. Because of this, Constitutional Carry is still often referred to as “Vermont Carry.”1

On June 11, 2003, Alaska Governor Frank Murkowski signed House Bill 102, which removed the requirement to obtain a concealed weapons permit in order to carry a concealed firearm.2 The bill did this simply by amending the section of law that made carrying a concealed weapon a crime. It made that section apply only to individuals under 21, or to individuals over 21 if they are contacted by a peace officer and fail to inform the officer of possession.

It is important to remember that if any conduct is not made illegal by law, than it is presumed to be legal. Therefore, decriminalizing Concealed Carry was all that was needed to enact Constitutional Carry. No substantive changes to the concealed weapons permit law were necessary.

The law went into effect September 9, 2003. Since then incidences of murder, forcible rape, burglary, and theft have all declined in Alaska.

Arizona’s law eliminated the penalties and suspension of permit for failure to carry it, added language requiring the permit to be carried only when one is in actual possession and required to by “any other law” to do so, and added language making misconduct with a weapon by carrying concealed applicable to individuals under 21 instead of any unlicensed individual, thereby decriminalizing unlicensed concealed carry. 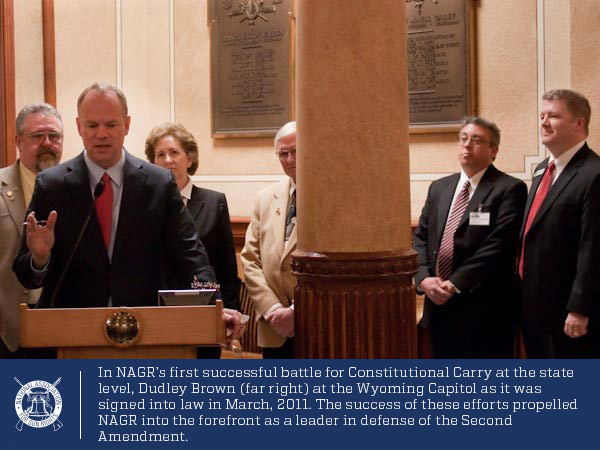 This simple two page bill added one paragraph, exempting a person who otherwise meets the legal requirements for a permit, and is not otherwise prohibited from possessing a firearm from a ban on carrying concealed firearms.

Not printed in the text of the bill were the legal requirements that appear in current law. Those requirements include being a U.S. citizen and Wyoming resident for at least six months. That means non-residents cannot carry concealed without a permit recognized by Wyoming. 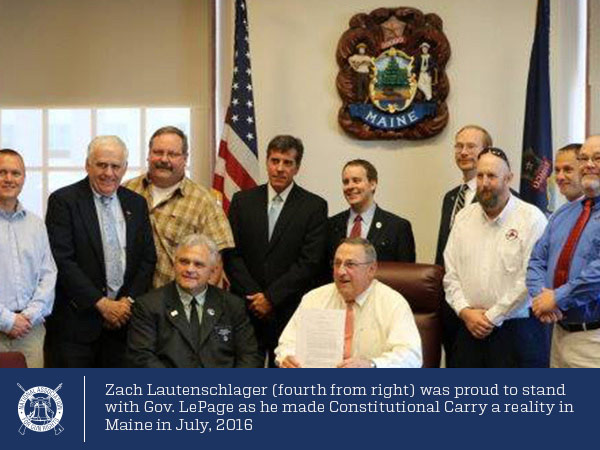 This bill simply added language into existing statute that allowed persons not prohibited from owning a gun to have the right to carry concealed without a permit. It also left Maine’s permit system intact. 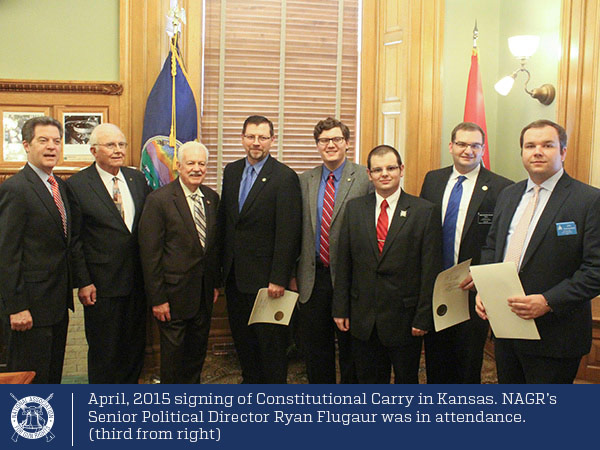 As long as the person is not prohibited from possessing a firearm under both state and federal law, they have a right to carry concealed without the need to ask for the state government’s permission. 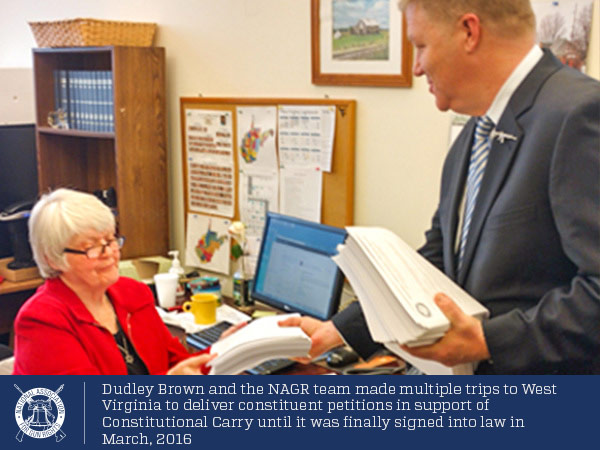 Pro-gun majorities in both houses of the West Virginia Legislature voted to override the veto of anti-gun Governor Earl Ray Tomblin. Permit-less concealed carry took effect on May 26, 2016.

Governor Butch Otter signed SB 1389, the Constitutional Carry bill, March 24, 2016.8 This legislation says that residents who are 21 and older, and who are legally able to own a firearm, can legally carry that firearm for self-defense, openly or concealed, without a government-issued permission slip. The Idaho Constitutional Carry bill took effect on July 1st, 2016.

Constitutional Carry, HB 786, passed the Legislature and was signed into law by Governor Phil Bryant on April 15, 2016; making Mississippi the ninth state to remove the permit requirement for concealed carry.9 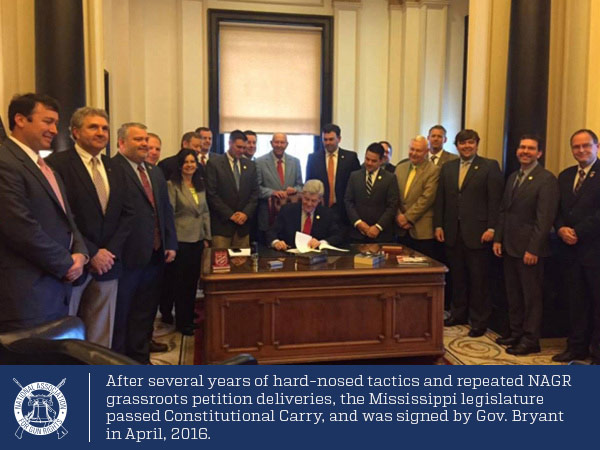 Since July 1st, 2013, open carry has been legal without a permit in Mississippi. However, Mississippians were required to pay a tax to wear a coat while carrying a firearm for self-defense. Under HB 786, permits are now optional for law-abiding gun owners who still wish to carry in other states.

In May of 2016, SB 656 cleared both chambers of the Missouri General Assembly with an overwhelming margin.10 The bill contained provisions to enact both “Constitutional Carry” and “Stand Your Ground laws.” On June 27, 2016, Governor Nixon vetoed the bill and a veto override session was scheduled. On September 14, 2016, Nixon’s veto was successfully overridden.

Constitutional Carry, SB 12, was signed into law by Governor Chris Sununu on February 22, 2017.11 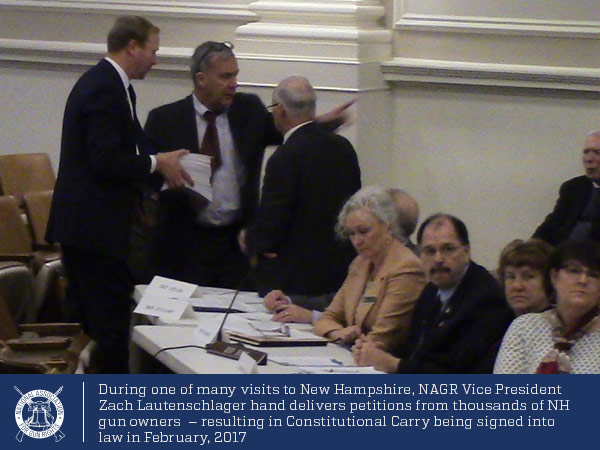 The bill, as passed, was murky on the legality of carrying concealed in a vehicle and also contained a North Dakota residency requirement of 1 year before one could carry without a permit. The legality of Constitutional Carry was clarified in an opinion issued by Attorney General Wayne Stenehjem on December 14, 2017 which noted that HB 1169 does allow for carrying loaded firearms in a vehicle. The residency requirement remains.

With a pro-gun Governor taking over in 2019, the South Dakota Legislature quickly passed Constitutional Carry, was the first bill signed into law by Gov. Kristi Noem on January 31, 2019. 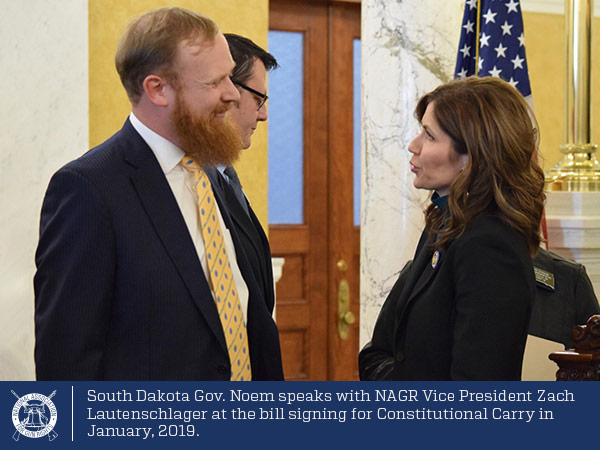 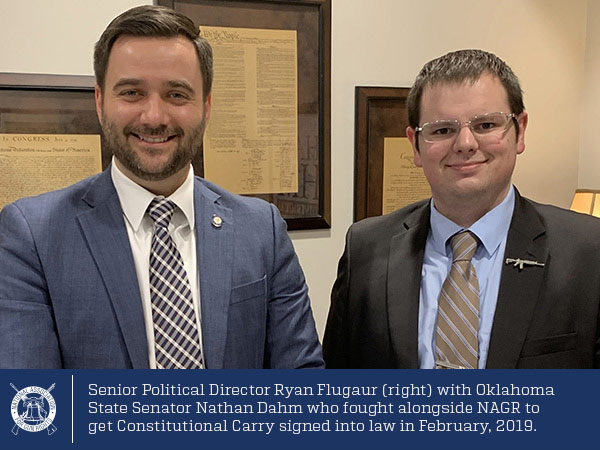 State Senator Nathan Dahm was critical in the passage of Constitutional Carry in Oklahoma. As it is currently written, Oklahoma’s law does not extend to people under the age of 21. 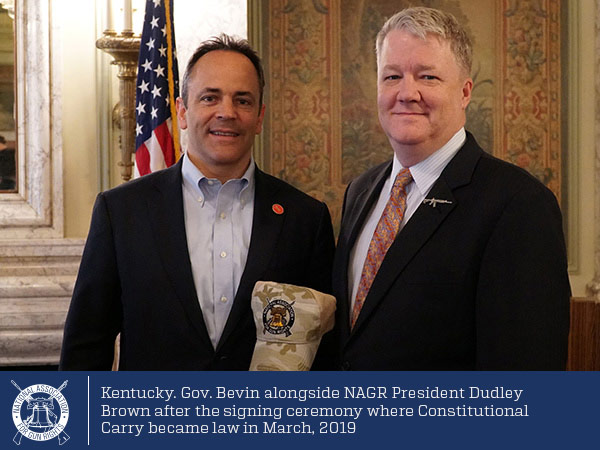 Representative Savannah Maddox was crucial to the success of SB 150. Thanks to the relentless activism of its members, Gov. Bevin thanked NAGR by inviting President Dudley Brown to stand alongside during the signing ceremony.

As of March 2020 Arkansas is recognized as a true Constitutional Carry state by NAGR, at least until another court decides otherwise.

Pettry v. State decided early in 2020 clearly applied the 2018 Taff v. State decision to a concealed carry case. That said, the statute is a mess and should be clarified.

NAGR is continuing to fight in the Arkansas legislature to ensure that Constitutional Carry is clearly and permanently codified into law.

After anti-gun Governor vetoes, lawmakers persistently compromising good bills and politicians simply avoiding the vote, a clean Constitutional Carry bill was finally passed in 2021. On February 15, 2021 Governor Spencer Cox signed HB 60 into law after the bill sailed smoothly through the Utah Legislature on the backs of grassroots gun rights activists.

For years an anti-gun Governor’s veto was all that stood in the way of Montana being fully recognized as a Constitutional Carry state. On February 18th, 2021 Governor Greg Gianforte signed House Bill 102 into law. A gun rights omnibus-style bill aimed at repealing a patchwork of local level restrictions, HB 102 included a “permitless” carry provision making Montana the 18th state on the list.

On April 8th, 2021 Governor Bill Lee signed his permitless carry bill, HB 786 / SB 765 into law. Tennessee’s law is the weakest of all Constitutional Carry states. Governor Lee’s bill is murky in the scope of what firearms are “carry compliant,” and doesn’t apply to all legal-aged adults, including college-aged women, young single mothers and some military-aged adults. Until the law is fixed, it’s more akin to “Confused Carry” than Constitutional Carry.

Constitutional Carry was signed into law in Texas on June 16th, 2021. Passing HB 1927 during the 2021 legislative cycle was a key legislative priority for the National Association for Gun Rights and state affiliate Texas Gun Rights.

NAGR and TXGR staff worked for over a decade in the Texas Legislature to get Constitutional Carry on the governors desk, and despite Republican legislators constantly stonewalling grassroots lobbying efforts, and actively working against this landmark pro-gun legislation, both groups were able to mobilize hundreds of thousands of Texans to lobby the legislature and get the bill passed.

Texas was the 21st state to make Constitutional Carry the law of the land in 2021. 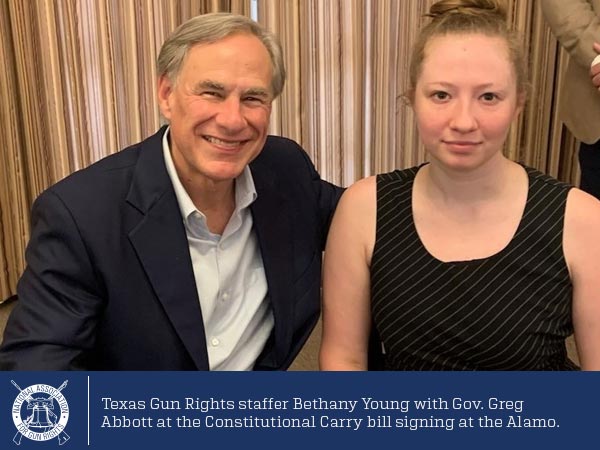 Alabama became America’s 22nd Constitutional Carry state after Governor Kay Ivey signed House Bill 272 into law on March 10th, 2022 only after NAGR members and supporters fought back against attempts by the Alabama Sheriffs’ Association and the business community gut or outright kill the bill.

The fight for Constitutional Carry started in the mid-1990s when a young Republican State Representative named Ron Hood first introduced what was considered “Vermont Style” Carry in the Ohio House of Representatives. At the time, Vermont was the only state in the Union to not have a permit requirement for carrying a handgun. State Rep. Hood continued to file Constitutional Carry every term he served in the Ohio General Assembly.

Ohio became the 23nd Constitutional Carry state on March 14th, 2022 after Governor Mike DeWine signed Senate Bill 215 into law. Unfortunately, due to term limits, Rep. Hood was not in the General Assembly when the bill finally became law, but it would have never happened without his leadership on the issue over three decades and the persistent activism of pro-gun Ohioans across the state.

Multiple states are considering, or likely to consider, Constitutional Carry. NAGR is working with legislators in many states to encourage passage for Constitutional Carry, please sign your unique state petition below to keep up the fight for your rights:

The Makings of a Good Constitutional Carry Bill

Pitfalls and Objections to Avoid in Constitutional Carry Legislation