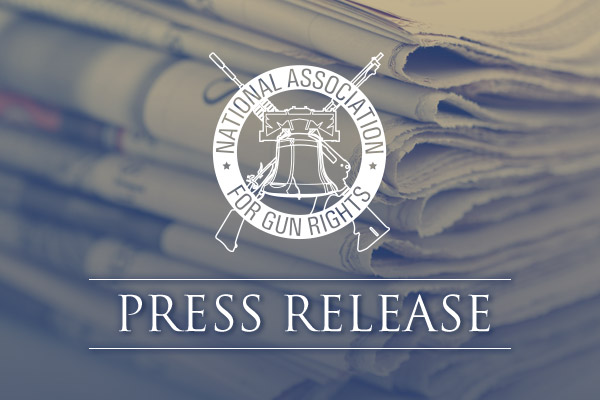 Washington, D.C. – Tonight, the U.S. Senate introduced and voted on an 80 page gun control bill within less than 3 hours. The bill, known as the Bipartisan Safe Communities Act, passed an initial procedural vote by 64-34 tally. A vote on final passage in the U.S. Senate is expected before the end of the week.

“This is dark moment in the fight for our Second Amendment rights, but we aren’t giving up – we’ll only double down in our opposition,” said Dudley Brown, President of the National Association for Gun Rights. “Thanks to the treacherous work of anti-gun Republicans Mitch McConnell and John Cornyn, tax payer funding for Red Flag gun confiscation and de facto gun bans for 18-20 year old Americans is now closer to becoming reality than it ever has been in American history.”

Text of the 80 page Bipartisan Safe Communities Act was introduced Tuesday afternoon and voted on before the evening’s end. The legislation implements federal Red Flag gun confiscation funding, imposes a new misdemeanor gun ban, expands the NICS registry for 18-20 year olds, and criminalizes the private sale of firearms for scores of law-abiding Americans.

“This bill was negotiated in bad faith and every so-called pro-gun Republican Senator who signed on to it should remove their signature, oppose the bill, and vote NO. Anti-gun Democrats are already saying this gun grab is just the start and that this won’t be enough for them. If the Senate passes this bill the floodgates for every single gun ban imaginable will become a reality – and Republicans like John Cornyn will own it in full.” concluded Brown.

The National Association for Gun Rights is the nation’s largest “no compromise” pro-gun organization, with 4.5 million members nationwide.

Supreme Court Rules in Favor of Public Carry of Firearms

Last night, the U.S. Senate introduced and voted on an 80 page gun control bill within less than 3 hours. The bill, known as the Bipartisan Safe Communities Act, passed an initial procedural vote by 64-34 tally, and a vote on final passage in the U.S. Senate is...

The National Association for Gun Rights is denouncing Senator John Cornyn, and demanding that he apologize after he called Texas GOP activists a “mob” in the wake of his support for federal gun control legislation. During...

National Association for Gun Rights urges all House Members to vote NO on unconstitutional gun control legislation Washington, D.C. –Tonight, the House of Representatives will vote on H.R. 7910 – a gun control bill which strips Second Amendment rights from millions of...

Today, a horrific act of evil was carried out by a deranged murderer in Uvalde, TX. Innocent children and adults were left defenseless against a madman because we refuse to protect our children while at school.  Every day law-abiding citizens use firearms to...

Washington D.C. – On Monday, President Joe Biden announced Steve Dettelbach as his nominee to become the permanent director of the Bureau of Alcohol, Tobacco, Firearms, and Explosives (ATF). Dettelbach will have to be confirmed by the U.S. Senate before taking the...

Atlanta, GA – Senate Bill 319, Georgia’s Constitutional Carry bill, passed the Senate 34-22 today and is headed to Governor Brian Kemp’s desk for signature.“This is a great day for gun owners as fully half of the states in America will have restored the constitutional...

Florida Gun Rights supports the call for a special session and the restoration of the right to keep and bear arms Tallahassee, FL – Today, Governor Ron DeSantis called on the Florida Legislature to hold a special session in April and pass Constitutional Carry into...

Montgomery, AL – House Bill 272, Alabama’s Constitutional Carry bill, passed successfully out of conference committee which removed anti-gun amendments that put passage of the bill in danger. It will now head to the desk of Governor Kay Ivey for her signature.“This is...

Washington, D.C. – Sources on Capitol Hill confirm that Sen. Chuck Schumer and Speaker Nancy Pelosi included the Violence Against Women Act in the larger omnibus spending package which needs to pass soon in order to avoid a government shutdown.“Make no mistake – the...

After a nearly ten year battle, HB 1296 is going to the Governor to sign Indianapolis, IN – The National Association for Gun Rights and its state affiliate Hoosier Gun Rights celebrated the passage of HB 1296, Constitutional Carry, out of the legislature late...

Panama City, FL –At a press conference today, Governor Ron DeSantis was asked about his stance on proposed Constitutional Carry legislation in Florida. His response was swift: “Put it on my desk and I’ll sign it.” (full press conference) “We’re thrilled that Governor...

During the State of the Union address last night, President Joe Biden took time to attack the Second Amendment and called for numerous gun control policies designed to restrict legal firearms ownership in America. “Joe Biden is an enemy of law-abiding gun owners...

Columbus, OH – The National Association of Gun Rights is urging the Ohio House of Representatives to pass Senate Bill 215 – Constitutional Carry. Introduced by Sen. Terry Johnson, SB 215 passed out of the Senate by a 23-8 vote on December 15 of last year. “Senate Bill...

Montgomery, AL – As lawmakers return to Montgomery for the 2022 Regular Session, the National Association for Gun Rights is renewing its call for Alabama lawmakers to pass a clean Constitutional Carry bill with no anti-gun amendments. “While it seems there is appetite...

Richmond, VA – After passing out of the House Privileges and Elections Subcommittee by a 7-1 vote, the anti-gun and anti-free speech “Gag Act” bill (HB 500) was defeated after Republican bill sponsor Tim Anderson pulled his legislation from further consideration. “On...

Governor Ricketts Promises to Sign Constitutional Carry in to Law

National Association for Gun Rights testifies in support of Constitutional Carry Lincoln, NE – Last week during the Governor’s Forum at SHOT Show in Las Vegas, NV, Governor Pete Ricketts said he would sign Constitutional Carry legislation into law if it made it to his...

Indianapolis, IN – The National Association for Gun Rights Political Action Committee is actively recruiting primary challengers to run against and unseat Republican Indiana State Senator Liz Brown in 2022. “Sen. Brown is your typical gun hating RINO and it’s time for...

Over 35,000 Citizen Petitions Urging the Passage of Constitutional Carry Delivered in Montgomery

Montgomery, AL – Today, National Association for Gun Rights staff and volunteers hand delivered more than 35,000 citizen petitions to lawmakers in Montgomery, urging them to pass pro-gun Constitutional Carry legislation in 2022. “The people of Alabama are sending a...

Indianapolis, IN — The National Association for Gun Rights is calling on the Indiana State Senate to quickly pass Constitutional Carry and send it to Governor Eric Holcomb’s desk for approval. “Thanks to the expedient and bipartisan passage of Constitutional Carry...

Montgomery, AL – The National Association for Gun Rights launched a grassroots political campaign on Wednesday, exposing the deception of Alabama sheriffs who are lobbying lawmakers in Montgomery to oppose Constitutional Carry legislation in 2022. “It’s sad that...

Washington, D.C.  – On Monday, the Department of Justice called for a new rule to be administered through the Bureau of Alcohol, Tobacco, Firearms and Explosives requiring additional gun storage regulations for Federal Firearms Licensed gun dealers.The National...

Washington, D.C.  – Yesterday, Rep. Elissa Slotkin (D-MI) introduced the “Safe Guns, Safe Kids Act” which forces law-abiding gun owners to lock up all firearms in a home if minor children are present. Failure to do so could result in up to five years of jail...

Loveland, CO – The National Foundation for Gun Rights is demanding that California Governor Gavin Newsom and Attorney General Rob Bonta back down from their new legislative proposal which is designed to nullify the Second Amendment in California, and to create an...

Gun Rights in Danger as McConnell and Schumer Work to End Legislative FilibusterMitch McConnell and Chuck Schumer are working to end the legislative filibuster in a “one time” process in order to raise the debt ceiling Washington, D.C.  – In an effort to raise...

Tallahassee, FL – At a political event over the weekend, Governor Ron DeSantis verbally pledged his support for Constitutional Carry if the Florida Legislature sends the bill to his desk for his signature. “We’re thrilled that Governor DeSantis has pledged his support...

Kyle Rittenhouse Cleared On All Charges

Loveland, CO – Today, the jury in the Kyle Rittenhouse trial cleared Kyle of all charges against him, confirming that Kyle acted in self-defense against violent attackers during the Kenosha, WI riots in 2020.   “Today, the American justice system worked as designed,...